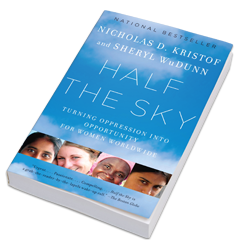 I am thrilled and honored and humbled to be working these next couple of weeks on a short splash video promoting long-time client Independent Television Service‘s involvement in the documentary film adaptation of HALF THE SKY, a New York Times bestselling novel by Nicholas Kristoff and Sheryl Wudunn.  If you haven’t read the book, go get it right now, drop everything and read it.
The book has spawned a worldwide movement to empower women and girls, as THE most urgent human rights campaign of our generation.  This includes ending modern-day enslavement and sex trafficking of young girls, providing equal education, nourishment and health care to females around the world, and ending violence against women.  Period.  It’s being tackled at the highest levels of NGO’s and governments, but there is plenty that each of us as individuals can do to insist that it happens faster:  each day, each hour, more women and girls die needlessly, simply because they are female.

You can open a Kiva Account and give a $25 micro-loan to a woman entrepreneur in a developing nation…you can easily do it through your Facebook account.  There are loads of other things you can do…go get Nick and Sheryl’s book and read it!  There is an action list at the end of the book.

The book is being adapted into a series of documentaries that will air on PBS.  ITVS is gearing up to co-produce and expand outreach.  I am a tiny, tiny cog in this giant wheel…but I am so happy to be doing my little piece for the cause, editing a trailer for them.

Nice to be busy working on something that I care deeply about.