I wonder at what point I became aligned with the underdog?  To me, it feels like it’s coded into my DNA.  I naturally want to support and back David instead of Goliath…the A’s instead of the Giants…and of course, never the New York Yankees. This sentiment serves me well as a documentary editor…the most interesting stories are about those who are down and out, disempowered, disenfranchised.  Those who must somehow rise above insurmountable odds to speak their truth to power, or find justice, or sometimes, just make it through the day to live like anyone else. 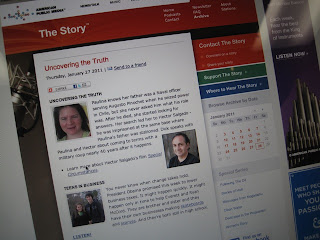 Today I listened to this amazing radio story, one that has been developing for some time.  Over a year ago, Hector Salgado, the hero of our documentary Special Circumstances, forwarded to me the most amazing letter, written to him by a woman in Chile who believed her father was somehow responsible for wrongdoings during the 1973 coup in Chile.  It was a heart-wrenching letter, and I remember crying when I read it; this poor woman struggling to come to terms with her own fear of asking the hard questions, and yet unable to stop herself from wanting to know the terrible answers.
Now, the woman, Paulina, has come forth, in an exclusive radio interview with Dick Gordon on American Public Media’s THE STORY.  Paulina’s story picks up where Special Circumstances leaves off…Hector has told his truth, and now people in Chile are beginning to ask questions, like:  “Dad, what did you do during the war?”  Paulina found Hector through Google…just like Hector found most of the perpetrators in his search.  And through emails she discovers that her father worked at the prison where Hector was held as a prisoner of war; and Hector knew him and remembers seeing him.  I get chills just thinking about it.  Their entangled histories are at the heart of this radio story, which is well worth listening to.
This has been a hard week…kind of slow here in the edit room, and funding for documentaries is scarcer than it’s ever been.  Been having conversations with editor friends about the future…will we be able to keep doing what we do?  How?  It’s good to experience a little tangible evidence of why it’s so important for us all to keep fighting the good fight.  Hector pursued the perpetrators of the violence in his home town of Tomé because he simply couldn’t walk away.  He was stuck in 1973 and he had to find the truth so he could move forward with his life.  Through the process of making and showing the film, along with his partner and film director Marianne Teleki, they gave thousands of others a voice.  Each of us a tiny grain of sand…yet all our energies adding up to big impact and big change.  Adelante!