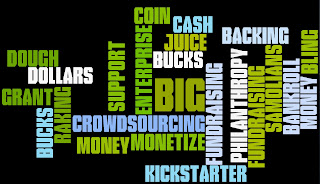 Every film project needs a fundraising clip, no matter what stage of production or post. As a documentary editor, I feel like I spend as much time editing fundraising clips for filmmakers as actual films. And now with the growing popularity of crowdfunding sites like Kickstarter.com and IndieGoGo.com, and individual film websites, a good short video that gives a potential funder a solid idea of what your film is about is essential.

So the question is, what to show?

Here are five tips to consider when crafting your film’s fundraising clip.

1. The Top 20 moments. When I begin work on a fundraising clip, particularly if it’s the first time any material from the film has been edited, I always begin by asking the filmmaker to show me the “top 20 moments” of the film. By that, I mean, what are the 20 most beautiful shots, or scenes with the most emotional intensity, or soundbites that succinctly raise the big questions of the film. I want to see those “wow” moments strung together in a sequence in no particular order. Once I know what the best of the best material is, I can begin to shape a storyline for what we should include in the trailer.

2. Play to your funder’s goals. If you are making a film about Hawaii and one of your 3 main characters is Native Hawaiian, and your funder is specifically funding films about Pacific Islanders, then by all means highlight the Native Hawaiian character. You may find that you will need to make more a more general fundraising clip, say for Kickstarter or your website, and then more specific clips that cater to the funding goals of specific funders.

3. Raise the questions, raise the stakes. When you are editing the trailer, you are not editing the film.  So you don’t have to resolve anything. But you do have to raise the important questions and conflicts of the film. And you have to raise the stakes by making us feel that learning the answers to these questions is urgent, or resolving the problem is critical. On a piece of paper, make a list of the most important questions and the chief conflicts of the film (Will justice be served? Will Jane find her real father? Will the lost treasure be found?). And then include the footage that creates the greatest urgency or desire for those questions or conflicts to be resolved. Then leave your potential funder hanging off the cliff…until they write you a check.

5.  Show the diversity of footage you have; show your style of storytelling. If you are working with interesting archival footage, or reenactments shot in a particular style, or interviews shot in a distinctive way, or animation elements, be sure to include a taste of all of that in your fundraising clip. If your film is told in the first person, make your fundraising clip in the first person. Give them a sense of the way the actual film will look and feel, and show your funder that you have the chops to be able to pull it off.

Please note that every funder has different requirements, and you should read the funding guidelines on their website carefully to know what they are asking for. Sometimes funders want to see edited scenes of a work in progress. Sometimes a montage of footage in a trailer format will do. Every funder has a different length requirement: 5 minutes, 10 minutes. Some funders have someone on staff for you to speak with, in which case I recommend you call them, and introduce yourself and ask them what they would like to see. It’s important for your potential funder to get to know you, and a good way is by talking to them to learn how you can best align your film project to meet their funding goals.

What has worked most successfully for you in a fundraising clip?

If you would like to learn more about documentary fundraising clips and how to host a successful Work in Progress Screening of your film, join us in Honolulu for the monthly Women in Filmmaking Meeting at 6 pm on Wednesday, February 29, at The ARTS at Marks Garage, 1159 Nuuanu Avenue, Honolulu, HI 96817. I will be speaking, along with filmmakers Kimberlee Bassford and Robin Lung.